Adjudication in Ireland – What Next?

Adjudication in Ireland – What Next? 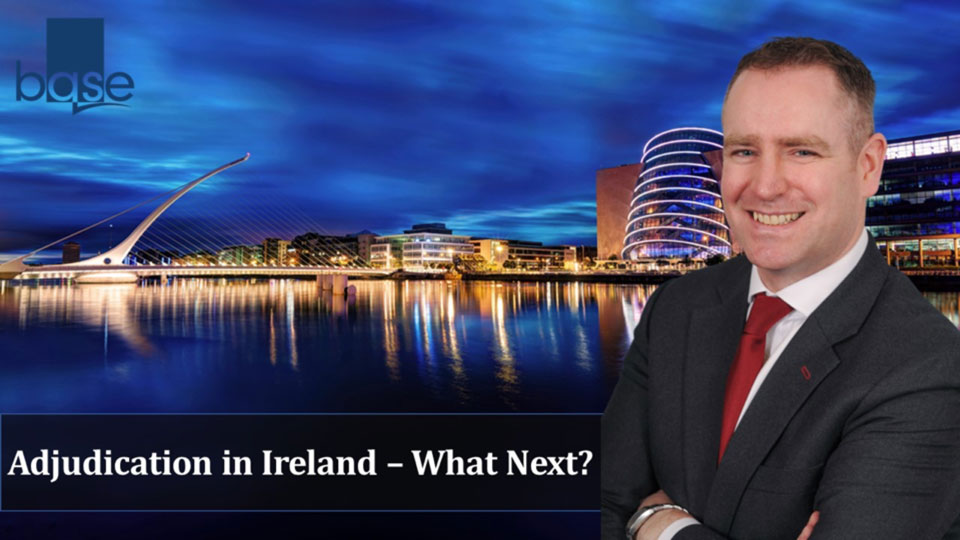 Parties’ submissions in Irish Adjudications are often a minefield of legal cases originating in foreign jurisdictions. Case law from England and Wales, Scotland and various Australian states are commonly referenced, albeit only as ‘persuasive’. Indeed, non-legal documents such as the Society of Construction Law (SCL) Delay and Disruption protocol are not outside the realm of an advocate’s thoughts when considering what the adjudicator should deem relevant.

This will come as no great surprise to anybody active in Irish construction dispute resolution. The depth of relevant Irish case law dealing with the more common issues in construction disputes is limited. Issues such as concurrency, delay, force majeure, extension of time, practical completion and Adjudication enforcement are rarely, if ever, considered by the Irish authorities.

The Irish Construction Contract Act 2013 came into full effect on 25 July 2016. Thereafter, construction contracts containing a ‘payment’ dispute could be referred to Adjudication by any party to the contract. The Act does not define what a ‘payment’ dispute might be, and some commentators argue that any dispute in the construction industry must be connected to payment somehow. However, with no definition to go by, I am not going to speculate either way.

The UK Act1 allows for any dispute to be referred. Covering a significantly wider ambit than that contemplated by the Irish Act, its intention was to keep the restrictions and exclusions to Adjudication to a minimum. Effectively, this allows a party to obtain a decision on a matter that does not necessarily have a payment aspect to it.

An advantage of this is that it allows parties to have the adjudicator decide liability issues and to mutually agree quantum. This offers a means of deciding an issue that can’t be negotiated and maintaining a degree of control over the commercial relationship. In Ireland, unless the parties agree to grant an adjudicator jurisdiction to decide such an issue, then this is presently not an option.

It has now been over three years since the Irish Act came into full effect. At the time of writing this, the Irish courts have not dealt with any case arising since the advent of Construction Adjudication. When compared to the experience in the UK, the contrast is stark.

Adjudication in the UK began life on 1 May 1998 in England, Wales and Scotland (1 June 1998 for Northern Ireland). Similar to the Irish experience, the textbooks recall much skepticism in the construction law sector as to whether legal enforcement would be forthcoming, whether the industry would embrace it and whether it would be more of a deterrent than an actual forum of dispute resolution.

Those questions and doubts were categorically addressed in a number of seminal judgements that effectively gave Statutory Adjudication in the UK its legs. Critically, it sent the message to the industry that an adjudicator’s decision would be enforced and upheld by the courts, save for limited circumstances that I will discuss below. Two of the best known and cited cases in establishing judicial support for UK Adjudication are:

It is noteworthy that both cases were decided within 26 months of the statute coming effective. What is even more striking is that, within four years of the Act becoming law, it is estimated that around 100 published judgements of the English courts related to Adjudication matters.2

Notwithstanding the scale of the Irish construction market, it is remarkable to consider that not one case related to Adjudication has rumbled its way through the courts. Anecdotal evidence suggests a small number have made their way to the court steps, but no further.

Macob sets out the English court’s endorsement of Parliament’s intention that an adjudicator’s decision shall be binding, pending final determination by arbitration, litigation or agreement.

The intention of Parliament in enacting the Act was plain. It was to introduce a speedy mechanism for settling disputes in construction contracts on a provisional interim basis, and requiring the decision of adjudicators to be enforced pending the final determination of disputes by arbitration, litigation or agreement[…] The timetable for adjudications is very tight[…] Many would say unreasonably tight, and likely to result in injustice. Parliament must be taken to have been aware of this. So far as procedure is concerned, the adjudicator is given a fairly free hand…

…It is clear that Parliament intended that the adjudication should be conducted in a manner which those familiar with the grinding detail of the traditional approach to the resolution of construction disputes apparently find difficult to accept. But Parliament has not abolished arbitration and litigation of construction disputes. It has merely introduced an intervening provisional stage in the dispute resolution process. Crucially, it has made it clear that the decisions of adjudicators are binding and are to be complied with until the dispute is finally resolved.”

Justice Dyson said in Bouygues at [25]:

If the mistake was that [the adjudicator] decided a dispute that was not referred to him, then his decision on that dispute was outside his jurisdiction, and of no effect. It is analogous to the valuer departing from his instructions in a material respect or answering the wrong question. But if the adjudicator decided a dispute that was referred to him, but his decision was mistaken, then it was and remains a valid and binding decision, even if the mistake was of fundamental importance.”

How can the decision be challenged, if not on the basis that there are errors of fact and/or law? By way of a Jurisdictional challenge or a challenge based on a breach of Natural Justice.

The common law recognises two fundamental rules of natural justice. Firstly, a man may not be a judge in his own case and secondly, a man’s defence must always be fairly heard. Where an adjudicator is deemed to have breached the rules of natural justice, their decision will not be enforced. This is not an easy position to prove.

These principles are the foundations built on the statutory bedrock of Adjudication in the UK. Without these cases and the application of these principles by the courts, it is improbable that the current situation, where Adjudication is prevailing forum of construction dispute resolution would prevail. At this time, a domestic Construction Arbitration is a rare occurrence (International Arbitration continues to be prevalent), and traditional issues rarely come before the courts. The Technology and Construction Court’s workload is often more concerned with issues of Adjudication enforcement rather than the intricacies of concurrency, delays, extension of time, disruption etc.

If and when the Irish courts grapple with the matters raised and dealt with under the early UK cases (particularly those considered in Macob and Dahl-Jensen), and supposing the judgements are as unequivocal as the UK courts’ decisions regarding the issues of enforceability and jurisdiction, the fuss about Adjudication will more than likely become very real and apparent to many in the construction industry; particularly those who are involved in payment.

However, if the Irish courts adopt an alternative approach to the UK, the foundations of Irish Statutory Adjudication may be found to be unstable by comparison.