Early warning process under the NEC: is it effective in practice?

Early warning process under the NEC: is it effective in practice? 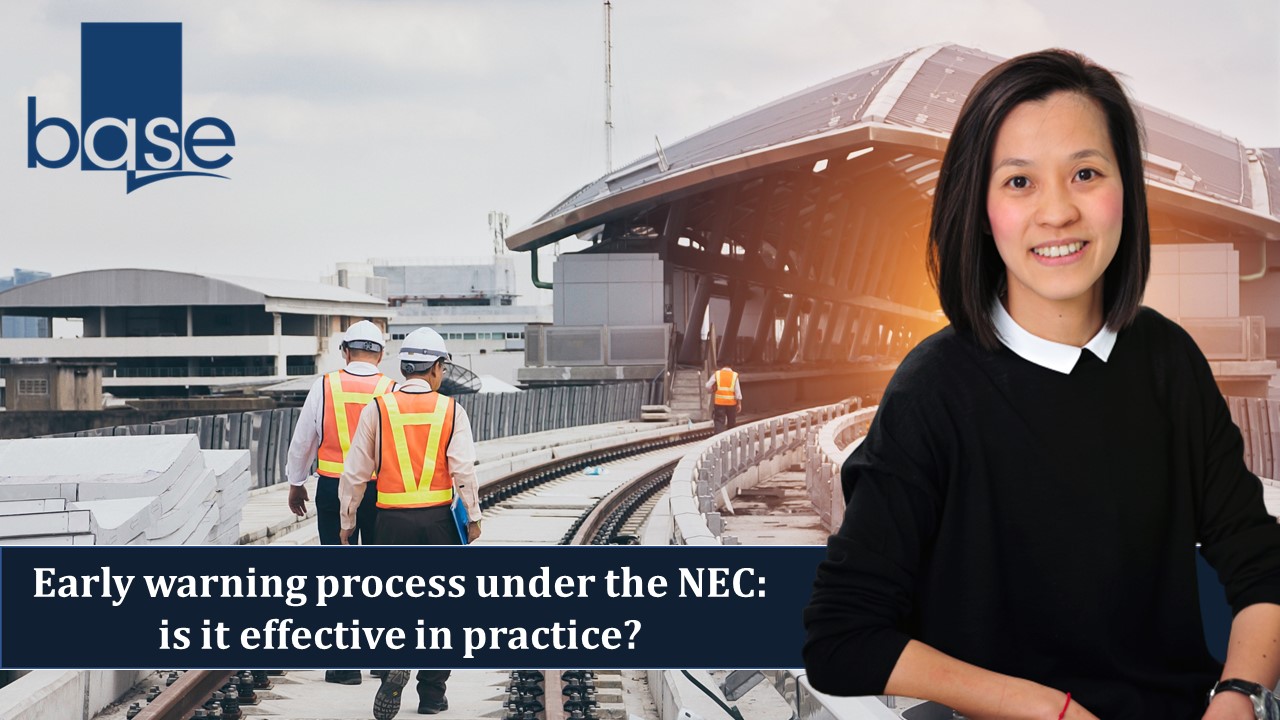 The New Engineering Contract (NEC) has become an increasingly popular form of contract and is used on numerous major infrastructure projects across the UK. Its ethos and procedures, which promote mutual trust and cooperation, are drafted to ensure parties work proactively together to mitigate project risks. The London 2012 Olympics, for example, used the NEC3, adopting its collaborative approach to support timely and successful delivery. On the other hand, recent major infrastructure works (such as Crossrail) have also used NEC3, yet remain in delay. This contrast in project outcome leads us to consider how it can be beneficial.

Although some changes were made to the early warning process in the NEC4 (2017), NEC3 is currently still the most widely used version in the UK construction industry. To understand the effectiveness of the process and its potential barriers in practice, I undertook research via a literature review, questionnaire and interviews with industry professionals, focusing on the following questions:

Does the contract contain any language that could create difficulty implementing the early warning process?

The early warning process has been widely recognised as a simple and critical process for dealing with any risk that could have an impact on the time, cost and quality of a project (Chevin, 2016). Early warning is likely to be needed in relation to events such as the discovery of, for example, unforeseen ground conditions, labour and material shortages or problems, design issues and the underperformance or insolvency of key subcontractors. Clause 16.1 of the NEC3 requires:

‘The Contractor may give an early warning by notifying the Project Manager of any other matter which could increase his total cost… Early warning of a matter for which a compensation event has previously been notified is not required’.

The sufficiency of the four matters listed above, and whether these are the only matters the parties can warn about, has been questioned by legal practitioner, Hall (2015). Hall queries whether the matters should be treated as the minimum requirement for raising an early warning notice and contends that the rigidity of contract language regarding the early warning process could create difficulties in implementation. She also questions the concept of ‘as soon as [one] becomes aware’ and considers whether this should be supported by more objective language, such as ‘as soon as one reasonably becomes aware’.

However, in comparison to the literature, the general view of the industry professionals interviewed in this study was that the language provides a clear guideline for the project team to administer the process and, if needed, this can be reviewed during contract drafting to provide flexibility to deal with specific circumstances. They recognise the contract criteria in raising an early warning notice ‘as soon as either becomes aware…’ and consider that it is clearly expressed; they contend that it is impractical to put a time bar on identifying the potential issues as the early warning is intended to cover unforeseen events that would not have been able to be predicted.

Is the early warning process in the NEC a fair mechanism to both parties?

If the contractor fails to give an early warning notice ‘which an experienced contractor could have given’ (clause 61.5), the project manager should notify the contractor of this when he instructs them to submit quotations, and any subsequent compensation event should be assessed as if notice was given (clause 63.5). Judge Lloyd QC (2009) and Patterson (2009) argue that clauses 61.5 and 63.5 penalise contractors who fail to issue early warnings. The interpretation of these two clauses is that if the contractor does not give a required early warning, the assessment of a compensation event cannot be greater than the assessment which would have followed the notice (Eggleston, 2006). However, those interviewed generally perceived that the clauses are a fair mechanism to the parties. The consensus being that the contractor, on the frontline of the project, would be motivated by the financial consequences of these clauses to identify issues at the earliest possible opportunity and contribute to providing possible solutions. In acting in the best interest of the employer, the project manager would be expected to be conscientious and give an early warning notice when matters arise.

Eggleston (2006) argues that any proven failure by the project manager to give early warning of a matter of which he was aware would potentially be a breach of clause 10.1 (‘[The parties] shall act as stated in this contract and in a spirit of mutual trust and co-operation’) and would entitle the contractor to damages for breach against the employer. Although this has not been tested by English courts, it could be a difficult argument for the contractor, due to the potential challenge in establishing the causation.

What are the practical issues when implementing the early warning process?

The purpose of the early warning process and risk reduction meetings is to allow the parties to foresee potential issues and minimise the impact in the interests of the project. In theory, the process encourages collaboration, innovation and the ability to react to circumstances during the contract. However, Eggleston (2006) and Hall (2015) argue that to comply with both the duty to warn of a problem or risk and the NEC’s ethos of acting with mutual trust and co-operation, parties must inform others of their wrongdoing; this could be a barrier to implementing the process effectively.

Eggleston (2006) has further concern on the ambiguity in Clause 16.2, which states that ‘the Project Manager and the Contractor may instruct the other to attend a risk reduction meeting’, as this could be interpreted as an optional requirement for the parties. The clause also allows the project manager and contractor to instruct other project participants to attend but only if the other agrees, which could exclude some of the project team affected by the issue but not invited. This subjective decision-making may jeopardise the effectiveness of these meetings, and the contractor and project manager may be tempted to restrict the membership of the meeting to avoid loss of control during the process, especially if they are attempting to safeguard their personal reputation and conceal their own mistakes (Loosemore, 1994).

However, the questionnaire results appear to contradict scholarly opinions on whether parties would admit their own faults. My findings suggest that it is difficult to conceal any wrongdoing under the NEC as it will eventually become apparent through progress meetings or revised programmes. One of the interviewees supported this point, placing emphasis on the importance of the project programme under the NEC and its use as a tool to identify issues and their causes.

The interviewees also expressed that the reason for these review processes (progress meetings, programme review meetings and risk reduction meetings), as commonly adopted in projects using the NEC Contract, is to identify all problems that are apparent to the parties, instead of focusing only on one party’s issues. They agreed that it is essential to include key personnel from all parties in the meetings, including the project manager, planner, and commercial, operational and technical teams. This, again, departs from Eggleston’s (2006) view that the parties may exclude some personnel from meeting in an attempt to safeguard their own reputation (Loosemore, 1994). In particular, one of the interviewees emphasised that it is important to invite all relevant personnel and supply chain to attend, including the individual or party responsible for the problem, so that they can advise on how the issue occurred and the concerns; the parties need to be open and clear and the problem has to be resolved on time and with the right person.

However, my study also reveals that difficult working relationships and the behaviour of team members has the potential to present particular obstacles to the development of trust and co-operation and eventually the effectiveness of the early warning process. The interviewees believe that those on a project would have to be occasionally defensive to protect their interests if there was an unscrupulous contractor or project manager involved with the contract.

The early warning process is intended as a management tool to facilitate identification of potential issues. However, this study has revealed that this process may be misused by the parties as a commercial/political tool for financial gain or to cloud the issue to cover their own delays. Nevertheless, the opportunities it offers to deal with real-time issues at the earliest possible stage would appear to outweigh this risk.

Does the early warning process create administrative burden to the project team?

The administrative burden of the NEC is a controversial topic within literature (Eggleston, 2006; Brooks et al., 2015; Pinsent Masons, 2011), which suggests that the early warning process has generated additional paperwork to the project team in comparison to other forms of contract. The findings of this study were inconclusive on this subject. Participants expressed that they would adopt common sense and a flexible approach when considering whether an early warning is required. This would prevent the issuing of warnings in response to every problem encountered. However, they also concluded that the lack of NEC knowledge in their supply chain has placed significant pressure on their daily workload by necessitating additional support. It was also suggested that the use of a collaborative platform, depending on its user-friendliness and comprehensiveness, could facilitate the project team to perform more productively and communicate more efficiently.

The results of this study show that the early warning process in the NEC is a practical management tool that aims to facilitate collaborative working and a ‘no surprises’ culture (NEC Users’ Group, 2016) between parties when identifying and mitigating risks. However, in practice there are several factors that could enhance its effectiveness:

Although the early warning process may need to be better implemented in practice, it provides a communication channel to encourage open conversation between parties to discuss any potential issues at an early stage and work collaboratively to achieve the best solution. This process has been recognised by other professional bodies such as FIDIC, who have introduced a similar mechanism in the latest published standard form of contract.