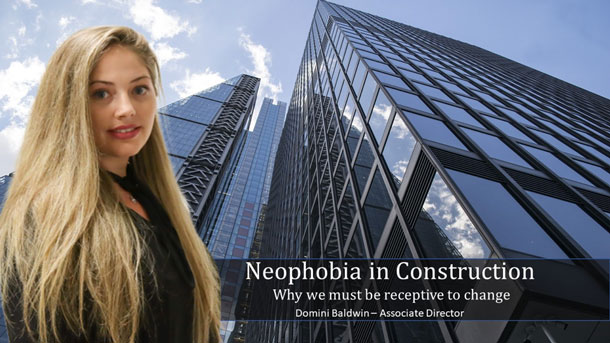 Why we must be receptive to change 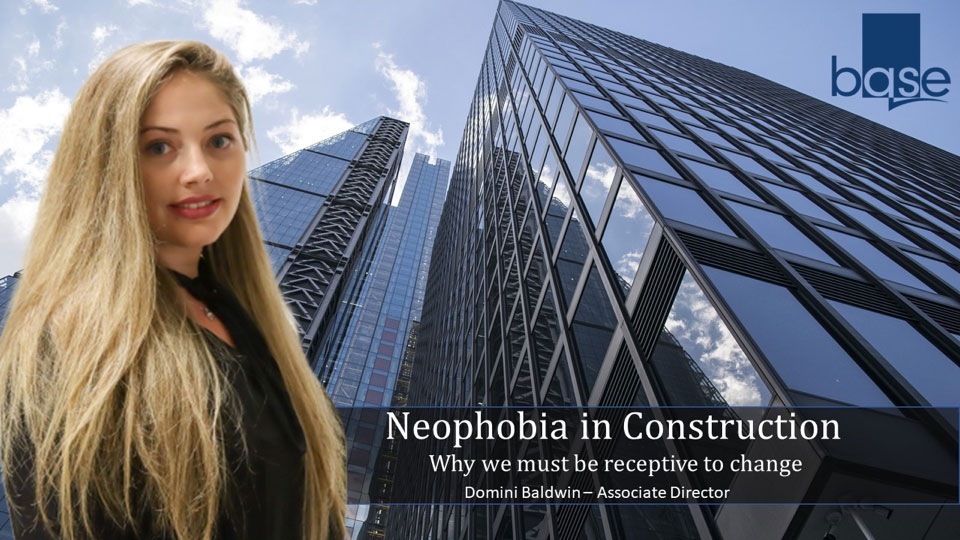 Most of us have heard of the age-old phobias: Arachnophobia, Acrophobia, Claustrophobia and Thalassophobia. Whilst the fear of spiders, heights, confined spaces and open water are relatively common, they are certainly not universal. So, I often wonder why the construction industry generally appears to suffer from Neophobia – the fear of anything new.

Walking into the unknown can induce anxiety in all of us. However, there is no reason why, in construction, we should be lagging so far behind many other industries – particularly when it comes to advancements in technology and efficient working. One area I find incredibly fascinating and vastly underutilised is biological imitation (biomimicry) – the act of solving complex human problems by replicating the models, systems and elements of nature.

I’m sure many will snigger behind their screens at my suggestion that we should welcome biologists into construction. But why? As a Quantity Surveyor, it goes against my nature to encourage increased costs. However, I can also see the long-term benefits of such a change and the future value it can bring when looking holistically at value for money (VFM). The study of living organisms – their morphology, physiology, anatomy, behaviour, origin and distribution – makes perfect sense to me as I believe there are many design solutions that we can learn from mother nature herself.

Why is this important to Quantity Surveying?

In the current economic climate, whereby stakeholders are demanding more for their money and contractors are scraping by without marginal gains, design efficiencies will pay dividends for both capital and life cycle costs.

In July 2018 Building.co.uk reported a damning headline: “Top 10 contractors under the cosh as margins slip to less than 0.5%” (Champ & Rogers, 2018). These statistics should be enough to raise our collective eyebrows. We have all seen the demise of Carillion and the ripple effect this has had within the industry. So, what can we do? How can we make a difference? We need to ensure that we are looking, not only at our processes, but also at our understanding of design, its impact as part of the whole life costing, and its influence on our environment. Biomimicry is making advancements in many industries but is still vastly underutilised in construction.

With many contractors working on tight profit margins, the significance of design efficiencies cannot be overstated. Biological organisms have developed survival mechanisms over billions of years, therefore the scope of what can be learnt from nature in construction is limitless. There are numerous basic design principles that can be imitated from nature, allowing us to ‘utilise the provisions’ within the client’s requirements, without having to re-invent the wheel every time.

Early examples of biological imitation include Sir George Cayley “who in 1809 studied the streamlined form of dolphins and trout in order to develop ship hulls with lower coefficients of drag” (Pawlyn, 2011, p. 13), to later examples such as the self-cleaning glass inspired by the lotus flower (Forbes, 2008). Even manufacturing has embraced biomimicry, with the design of ‘cars mimicking the box fish’ for streamline efficiency (Pawlyn, 2011, p. 13), and the design of the high-speed Shinkansen bullet train in Japan taking inspiration from the beak of a kingfisher (Moskvitch, 2011).

In Construction – Wind turbine blades and the humpback whale.

Wind turbine blades have been designed to imitate the bumps found on the pectoral fin of the humpback whale. Hamilton states “Harvard University researchers have come up with a mathematical model that helps explain this hydrodynamic edge… similar bumps could lead to more stable airplane designs, submarines with greater agility, and turbine blades that can capture more energy from the wind and water” (Hamilton, 2008, p1) 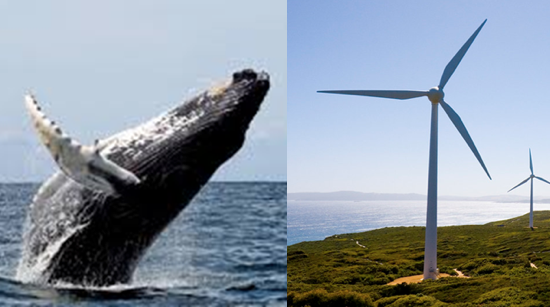 One of the most common problems found in concrete framed buildings is cracking. This could occur for many reasons, including temperature differences, settlement of structure, insufficient vibration at the time of laying the concrete and corrosion of reinforcement steel. Cracking causes ingress of deleterious substances into concrete, resulting in degradation and deterioration of structures. Due to this, concrete then must be rehabilitated. To surmount these situations self-healing techniques can be adopted; there are types of bacteria used in concrete that will function as a healing agent. 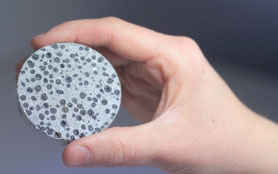 The leaves of the giant Amazon water lily grow over 2.5m across and, with rising flood waters, the leaf stalks grow in excess of 6m. Pier-Luigi Nervi, an Italian Engineer and Architect, studied the structure of the lily. It is speculated to have been the inspiration for his project the ‘Palazzetto dello Sport’ which was designed for the Olympics in Rome. 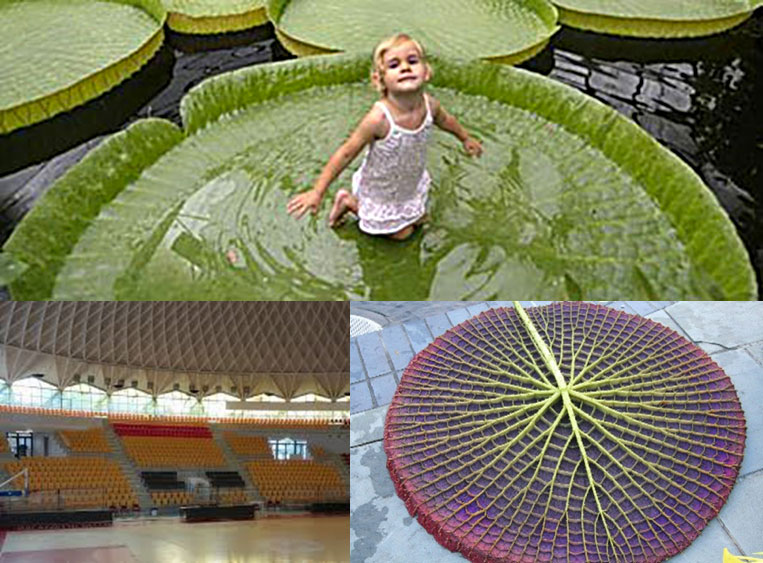 Light weight structures have the ability to reduce both transportation costs and the need for piles and deep foundations. It is also far easier to maneuver lightweight materials rather than steel beams.

The skull of a bird is one such example; architect Andres Harris identified this unique structure and designed the canopy below. The thickness of a bird’s skull is amplified, yet the weight is decreased by creating multiple surfaces connected by a matrix of ties and struts. In a bird, bone tissue forms around pneumatised cells to create air voids between solid surfaces. The potential exists to mimic this as an efficient building technology using concrete, or eventually a more sophisticated material, around a web of inflated void formers (Pawlyn, 2011).

What does this mean for us in Construction?

The design responsibility on projects ultimately changes depending on the Clients requirements. However, in many cases, design and build is used. Not only can biomimicry inspire design, it can also provide better value for money, save on costs and reduce design liability through more efficient, effective and sustainable design solutions.

We need to embrace change and find new ways of developing engineering solutions within our industry. For example, Kevlar is one of the strongest man-made polymers – up to five times stronger than steel by weight. It is an extremely useful product, particularly in the creation of Tension Structures (which are subject to tensile strain as opposed to compression). However, there are major concerns with regards to both its production and effect on the environment.

The North Carolina Museum of Natural Sciences reported that spider silk, ounce for ounce, is also five times stronger than steel (when in tension). It is predicted that this material – one of the toughest known natural fibers – could one day be used to create silk armour to protect soldiers on the battlefield (Business Insider, 2018). Could the construction industry follow suit? Could we mimic the properties of spider silk, developing a way to create these Tension Structures without the harmful by-products? Could Biomimicry be the solution to some of our industry’s problems?

With client expectations continuing to increase and defect limitation periods exposing contractors for up to 12 years after Practical Completion, now is the time to work together and tackle our Neophobia head on. Opening doors to other industries and their professionals may prove disruptive, but the joint learning, new ideas and innovations that can come from those alliances can vastly improve our industry and introduce enhanced value for money.